The world has been casting a weather eye on a London based Singapore born designer Ashley Isham as his signature draping and strong tailoring have become one of the prestigious icons in a global fashion. Still in the early 30s, the urban fashion trendsetter Ashley has won the heart of fashionistas with his cutting-edge designs and distinctive blends of high-octane glamour and contemporary styling.

Having arrived in London in 1996 from his native Singapore land, Ashley embarked on his fashion education where he took a pattern cutting course at the London College of Fashion, during which his seeds of talent subsequently borne the fruition of an outstanding portfolio that allowed him to step into a prestigious Central St. Martin’s College in London and Middlesex University, respectively.

Inspired by the contemporary and classic pattern designs, the spiky hair boyish-looking Ashley later set up his own label ‘Ashely Isham’ upon completed his study in 2000 and continued to acclaim regularly at London Fashion Week. With his creative and innovative talent in producing collections of both prêt-a-porter (ready to wear clothes) and sumptuous couture, Ashley in 2001 opened a boutique called ‘Acquaint’ in London.

“My aspiration to open Acquaint was to sprout up the spirit of young designers as a means of promoting their fashion talent,” Ashley said during an interview with PMR Magazine. And it only took a couple years that Ashley rose to international fame after displaying his Autumn/Winter 2003 collection during the London Fashion Week. 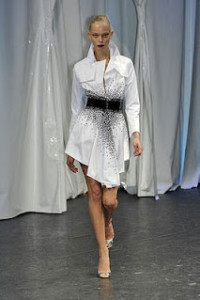 The following year, Ashley was named the official women’s wear designer for the 2004 British Academy of Film and Television Arts (BAFTA) awards, an event that is also known as the British Oscars. The rising star fashion designer with his unique handwriting label then was set on a red-carpet followed by his big step in the fashion business realm where he built a flagship boutique on Conduit Street, London in 2005.

“It’s a one-of-a-kind boutique,” Ashley reminisces the first moment he revamped his distinctive haute-couture while citing his handpicked collections from those of Sophia Kokoslaki, Lanvin and Chalayan as well as his own collections. “I especially like the caramel Yves Saint Laurent that I designed myself and still bearing the original wearer’s name in the label.”

Upon the establishment of Ashley boutique in London, the rather eccentric talented designer Singapore born has thus far earned a numerous accolades and designed clothes for world-class celebrities and royalty figures such as Jordan’s royal family, Princess Zara Phillips (the oldest granddaughter of Queen Elizabeth II), Angelina Jolie, Kylie Minogue, Mariah Carey and Dido. Not to mention an array of Ashley’s luscious collections, which have graced the pages of renowned magazines like British Vogue, Elle, Conde Nest Traveller and The Financial Times.

And cosmopolitan cities such as New York, Paris, Spain, Italy, Dubai, Saudi Arabia, Moscow and Singapore are just to name a few where Ashley’s collections are alluringly displayed in noted boutiques and world-class fashion stores. 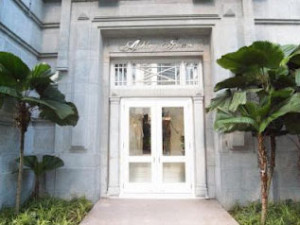 While wheeling on his international success, Ashley Isham finally opened his first boutique in his homeland, Singapore last June. Located at The Fullerton Hotel – the most Singapore’s historically elegant hotel – this boutique is his first full-fledged store in the world. It’s a standalone boutique carries more than 50 exclusive ready to wear clothes with his superb chic of urban designs.

Prior to the official launch of his Singapore’s boutique, Ashley Isham show during the 8th annual Singapore Fashion Festival 2008 held last March at Tent on Orchard Road exalted Singaporean fashion plates with the spirit of his Spring/Summer ready to wear clothes. Accompanied by the tune London Calling by the 70s British punk rock band The Clash, “The show was also my calling for Singapore’s fashionistas for classical glamour of high profile Ashley Isham trademark draping in my awe-inspiring collection,” the charming designer says.

Among those showcased by models on the catwalk were tiny well tailored shirt white dress, Ashley’s skillful draping with detailed cutting and color, and modern take on the classic black and white dress, he adds.

Ashley’s debut show in Singapore actually stretches back to the year 2005 where he attended the 5th Singapore Fashion Festival. Sponsored by Mercedes-Bens, this 10-day event also marked the spirit of London based designer Ashley Isham as an international recognition to ignite a big hope for Singapore to become a regional fashion hub.

And where he brought his glamour feminine creations with a natural flair for exceptional pattern and perfection cut in European urban style to the 6th annual Singapore Fashion Festival the following year; Ashley’s smartly unique blend fashion creation of East and West that symbolizes harmoniously cultural diversity in styling was sparkling his homeland with ethnic charms of upbeat maroon glamour chic. 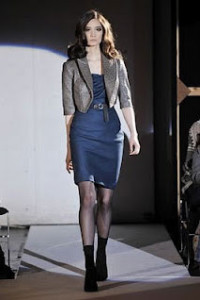 During the Sunday night glitz at the Royal Opera House in Covent Garden, London earlier this year, Ashley Isham unveiled his Autumn/Winter 2008-2009 collection of evening glamour on the large catwalk.

Inspired by Veronica Lake and the avant-garde style of the late 1960s and early 1940s elegance, Ashley Isham keeps innovating his talent in his latest collection where his signature draping glides the body while experimental tailoring in new fabrics pushes boundaries.

“My favourite is the 60s inspired silver glittery mini dress with laser cut fringed to perfection. And with the pared down 40s elegance of belted peplum jackets in vicuna, I describe such ultimate luxury as the ‘fabric of the gods.’ And the combination of modern colour of wide leg pants with jackets and coats in luxury couture details truly represents the concept of feminism.

“I love the idea of feminism, though I may have been tailored my designs in a rigid way. But that’s what the idea of Ashley Isham; to look back to the past in order to innovate new ideas for today’s fashion plates,” Ashley says while gesturing with energy and excitement. 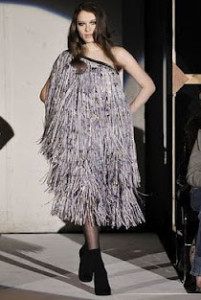 With the dark greenish and peacock blue, caramel, black and darker shade of a pale greenish colour, Ashley’s latest collection of dresses add a dark edge combined with the more feminine contrast of vivid orange, purple and cobalt blue.

“Such colours represent the beauty and luxury as I know that women in general want to look glamorous, feminist and beautiful,” Ashley adds while citing his myriad of sophisticated eveningwear style displaying a nuance of both modern and romantic.