Five years in Ho Chi Minh City, working as a hotel manager in the city once named Saigon, I’ve explored this city’s alleys, its boulevards, its riverfront, its museums, pagodas, temples, churches and palaces. 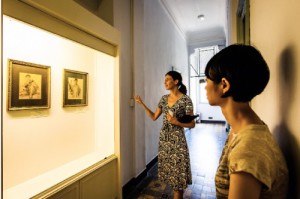 I’ve pieced together a pretty solid picture of Vietnamese history. I know what events followed each other, as well as the crucial names, dates and figures along the way, and even some of the lesser-known details peppering the country’s past.

But what I didn’t know much of were the personal stories of people who lived in those times. I had the frame and the outline, but there were spaces missing from the whole picture.

In March 2012, 30-year-old UK native Sophie Hughes opened the city’s first tour covering art history from the arrival of the French missionaries to the exhibits taking place this week.

Since so many of the hotel’s guests arrive seeking a strong injection of art and culture, I decided to get a preview of Hughes’ tour on my own.

The tour began in a Vietnamese café on Le Quy Don, crossed the street to a beautiful villa, pulled up in an air-conditioned van to a collector’s home in District 1, and turned a few corners to find the propaganda art shop on Dong Khoi, before heading to the jewel-box that is the Museum of Fine Arts and finishing in the minimalist white spaces of a contemporary art gallery. 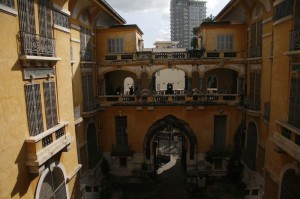 Along the way, Hughes draws on facts from her research to recreate the mental framework of each period, and what it was like to carve out a living as a Vietnamese artist at any point over the past century.

The stories she relates are at times amusing, at times distressing, but always passionately told. Over the three-and-a-half-hour tour the journey of the local art scene gradually becomes clearer to me.

I learn about the group of students who opened an art school in a forested rebel camp, the art patron who commissioned dozens of portraits of his family to help his struggling friends, and the combat artist who survived two wars and two treacherous journeys on the Ho Chi Minh Trail to retire as a colonel.

Her dialogue not only points out the crossroads where one decision changed the fate of the country and gives simple explanations of muddy political situations, but also brings an aspect of human emotion, life and color to a history that still has many visitors and ex-pats mystified.

The effect of all those stories, paintings, drawings, photographs and modern art pieces, is that I leave with a deeper sense of understanding of Vietnam than I had three hours ago.

Not a bad way to spend a morning.

Later on I was able to sit down with Hughes and talk about herself, her tour and art in general:

Question: You were born in London and raised in Newcastle. How did you happen to end up in Vietnam?

Hughes: I’ve always been interested in developing arts and sociology. I studied new religious movements and art in college, and I was working in the arts scene in London when I noticed some interesting things were happening in Vietnam. So I came out in 2004 and initially I worked at Galerie Quynh, and then I was director for Future Shorts film festivals in SE Asia for two years, before I started the tour.

When was the seed planted in your mind to open an art tour in HCMC?

When I first arrived in HCMC and would go to the Fine Arts Museum, I saw a lot of people sort of wandering about lost and looking very hot and bothered. I knew I had to do something about it. Last year I set myself a 30-day challenge to learn everything I could about Vietnamese art and history. What I discovered just blew my mind away, and I thought, “I could make something of this.”

You include all kinds of materials in your presentation. What sort of research went into making the tour?

I spent about six months on research, including photocopying, looking in libraries and other dusty places, and interviewing collectors, curators and artists themselves. I was very lucky to have the legendary Boi Tran Huynh-Beattie agree to be my mentor.

Do you have to be an art lover to enjoy this tour?

I don’t want the tour to exclude anybody. It’s more like a chronological history tour with art threaded through it. So art brings the color into the history – not that the history isn’t colorful, but art adds a new dimension.  People say, “I don’t like art” or, “I don’t understand art.” But if I told you the story behind the art, what the artist did, when he lived, you would love it. That’s when art becomes interesting.

I’ve had a lot of people join with no art experience at all, who’ve really enjoyed it.

Why should a visitor to Vietnam make art a part of their itinerary?

There are a lot of misconceptions and preconceptions about Vietnam. Art comes from human experience, not from historical fact. You can look at photos and read personal accounts, but a picture drawn by someone who was there and who engaged in the event gives a completely different perspective.

Over the last century Vietnamese art has been swayed and manipulated from outside and inside, but its artists have retained their sense of identity. In the tour we talk about the artists who were pioneers of their time. In the face of conflict and poverty, they remained true to themselves.

How has Vietnam’s art industry fared in recent years?

The art scene here still faces a lot of issues, but there’s been amazing growth and there are hardworking people working to create much-needed opportunities for young Vietnamese artists. There is a “watch this space” sense within the international art market, where eyes are set on Vietnam to see what its young people will come up with.I think that in changing times it’s important for young artists to be encouraged. It’s important for a society to keep its memory of the experience of the time, apart from the figures.

What would you like your tour members to take away from the experience?

I’d like people to come away with a greater understanding of Vietnam, to have an opportunity to rethink what they know and to see more layers, not just what’s in front of them in the crowded, frenetic streets.

Do you have any plans for the future of Sophie’s Art Tour?

It’s always going to change – change the pieces of art and change the stories told – but always keeping it interesting. If it becomes really popular, I hope to train Vietnamese to take it over. I’d like to hand it back.