As I walked through the urban labyrinth of narrow streets and alleys, I was taking a step back in history. Just like other cities in Morocco, Fez has a medina, a walled city which dates back as far as 1,000 years. 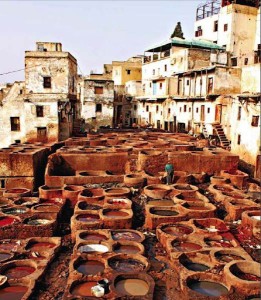 The houses in the medina are built around courtyards with an Arabic style of archways and detailed mosaics. While exploring one of the neighborhoods, I was stunned by a traditional Moroccan home boasting a simple patio as the heart of the premise. The building is topped with a glass roof and has a small but refreshing fountain inside.

Morocco’s second largest city is divided into three districts. The quaint old town of Fez, popularly known as Fez El Bali, breathes the charms of a medieval city where donkeys are the only means of transport.

The second territory is Fez Jdid. Literally meaning the new medina of Fez, this 13th-century town is home to Dar el-Makhzen (Royal Palace) and Mellah, the former Jewish quarter.

Next is Villa Nouvelle (The New City), which was built by the French during the 19th and 20th centuries. The area features modern business districts replete with retail and commercial centers. This part of town may hold little to no appeal to travelers, but I particularly admire the cobblestoned streets fringed by palm trees. Add to that the breezy, languid afternoon, the experience is quite unforgettable, I shall say.

A religious institution serving a blend of culture, architectural design and education

Bab Bou Jeloud or the Blue Gate is the main access to the medina and its central area.

Spring and fall are the best since the winter gets very cold and the temperature may rise to 45 Celsius in summer.

Published in 3S Newsletter, Jan-Apr 2014. The writer is a coffee enthusiast who has lived nomadically in Den Haag, Bali and Jakarta, to name some. For more info: www.visitmorocco.com