The fast growing number of population in Jakarta has provided the catalyst for land limitation and the city’s notorious traffic that condemns commuters to hours in their cars. Correspondingly, the capital’s biggest superblock Podomoro City has been playing its crucial role to help realize the dream of city-dwellers seeking a solution where shopping, living, entertainment and working are conjoined into one stop destination. 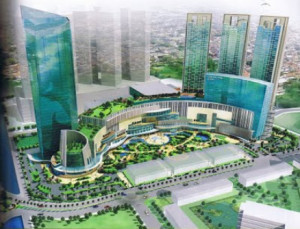 Sitting on the Western Jakarta’s prime area, Podomoro City offers location that is strategically linked to business centers in West, Central and South of the city.

It is a flagship development of the country’s leading developer Agung Podomoro Group (APG). With over 40 years of property development under its belt, the giant APG has built dozens of shining projects; and is now reaching the completion of Jakarta’s largest superblock.

Podomoro City is built on a 21-hectare land with 4-hectare green area reserved for park. This superblock comprises 15 residential towers, a world-class shopping mall, a five-star hotel and an office building; all are integrated in one location that displays a gathering force of five elements, according to Alvin Andronicus, Podomoro City’s marketing general manager.

The first element is the six-leveled Central Park Mall, which is currently the largest single mall with its anchor tenant Sogo being the biggest department store in Indonesia.

What interesting about Central Park Mall is its ecological theme that is inspired by Indonesia’s tropical nature, which stimulates the five senses; hear, see, touch, smell and taste – all of which take visitors to blend with nature while indulging in shopping.

“Visitors can sense the natural vibrancy of our five senses through the mall’s alluring sights, energizing ambience, soothing sounds and natural charming venue in a breezy landscape surrounded by range of plants,” Alvin attests.

Opened since September 9, 2009, the mall is targeting middle-class to high-end society. “The concept is one-of-a-kind, indeed. With total leasable area of 115,000 sqm, the mall has drawn more visitors while tenants have filled in the entire mall’s retail space,” he says while gesturing in excitement.

Today, the mall fulfills every customer’s needs from the daily grocery, local and international leading brand apparels, electronics, fitness center and of course eateries and entertainment, of which all conveniently arranged in one integrated location.

The second element is the presence of superblock’s high-rise office tower that contributes to a comfy professional life. “It’s where business and leisure are combined into a positive vibrancy with all the amenities and facilities being nestled within your reach,” Alvin remarks.

The third element is the superblock’s 15 residential towers. The first ten residential towers, which are made up of Mediterranean I and II, have about 95 percent occupancy rate altogether. “And we have completed all the constructions of the other five towers, two of Royal Mediterranean and three of Central Park Residence, with grand opening slated to take place this year,” he further says.

The Central Park Residence towers are adjacent to the mall, the office building and the hotel within the 9-hectare Central Park development.

The fourth element is the hotel of 420 rooms. Scheduled to open its door in July this year, the hotel is to be run and managed by Accor, an international hotel network.

The fifth element is the 4-hectare park, 1.5-hectare of which reserved for TriBeCa. With open air concept and 180° facing the open park, TriBeCa provides fresh air for visitor wanting to savor their palate with various dishes offered at alfresco dining. There are cafes for those opting for relaxing in a laid-back ambience while enjoying the view or entertainment such as live band. 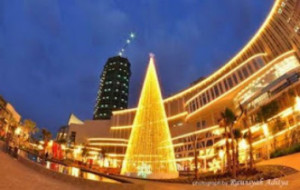 The concept of TriBeCa is greatly contributed by the ideas of Todd P. Bennitt of Bennitt Design Group, a California based innovative planning and design firm. “Bennitt is also the one who aspired us in creating Central Park as a distinctive venue stimulated by the five senses,” Alvin remarks.

An integrated green living in harmony, Podomoro City has earned the predicate of 3 Ts – Terbaik, Terbesar, Terlengkap (being the Best, the Biggest, the Most Comprehensive).

The gathering force of five elements applied in Podomoro City can be interpreted as “an ideal living concept”. “But the meaning of ideal in our vocabulary includes comprehensiveness, comfort and convenience,” Alvin concludes.

This advertorial was published in HighEnd Magazine, May 2011 edition.