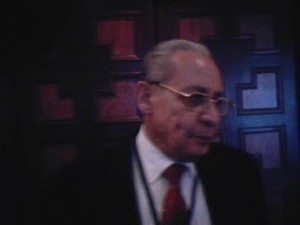 The United Nations Security Council (UNSC), namely its six major powers — the United States, France, Germany, China and Russia – and Indonesia recently voted to impose tougher sanctions against Iran over its uranium enrichment program. The sanctions include banning Iranian arm exports and freezing the assets of both individuals and organizations involved in Iran’s nuclear program.

However, Indonesia’s support of the new sanctions has sparked much controversy back at home, both in the House of Representatives and with the public in general, where many question why President Susilo Bambang Yudhoyono threw his support behind the U.S. rather than the Islamic republic of Iran.

It is clear that the Indonesian government needs to better vocalize its stance to help mold public opinion by revealing the truth about Iran’s nuclear ambitions and why it is important for Indonesia to support UNSC Resolution 1747.

The Point spoke to former Foreign Minister Ali Alatas, just appointed as one of President Susilo Bambang Yudhoyono’s new advisors, on the issue. The following are excerpts from the interview:

Q: Why is so important for the Indonesia government to support the UNSC on new sanctions against Iran?
A: Resolution 1747 is a continuation from the previous resolution 1737, which asks that Iran cooperate with the IAEA to allow full inspections of Iran’s nuclear power plants. Any signatory to the Non-Proliferation Treaty (NPT), including Iran, must abide by the treaty’s conditions, which are to prevent the spread of nuclear weapons and be cooperative in utilizing nuclear energy for peaceful uses. Iran has been playing hide and seek with the IAEA in letting the agency monitor a number of Iran’s nuclear plants.

Q: Do you believe that Iran’s nuclear project is to make nuclear weapons?
A: It is too early to say, but despite the lack of evidence, the UNSC has seen an uncooperative attitude by Iran in complying with the both the UNSC and the International Atomic Energy Agency (IAEA) in terms and conditions. Mohamed ElBaradei, the head of the IAEA, has claimed that Iran’s lack of cooperation with the agency has left suspicion and many countries are wondering whether Iran’s uranium enrichment is perhaps another Manhattan project.

Q: So, it is not because of pressure from the United States to agree with the resolution?
A: Again, this is a misunderstanding. Don’t forget that China and Russia, being Iran’s closest allies, were there to vote on the new sanctions. It is a consensus made in the level of diplomatic majority voting. China, a nation that pretty much depends on Iran’s oil, and Russia that has put a high value on building nuclear plants in Bushehr, both have said ‘yes’ to the UN resolution. Even Russian President Vladimir Putin and Chinese President Hu Jintao had before called on Iran to fulfill the UN Security Council’s demands over its disputed nuclear program. It is not about America. Do not make any presumption that we are under pressure from Washington. That is a wrong perception. The consensus has been made by many countries, including non-proliferation nuclear nations like Qatar. As an Islamic country, Qatar does not support the use of nuclear weapons. Thus, imposing the sanctions are nothing to do with Islam. It is not about being Muslim nor non-Muslim.

Q: What is Indonesia’s stance on Iran?
A: Iran said that the country’s long abandoned project of generating electricity from nuclear power should be completed. And looking at an alternative for the future of Iran’s oil commodity, nuclear power can be the right choice as it can be produced to generate power and other positive purposes like for medicine and fuel. Therefore, Indonesia has fully been supporting the Iranian nuclear plant, should the project be aimed at such positive purposes. However, we never agree with any countries, including Iran that develop nuclear weapons. For instance, Indonesia has also expressed disagreement with both India and Pakistan’s nuclear missile projects.

Q: How about the world perception of the UN being acquiescent to Israel and its nuclear weapons?
A: I’m quite disappointed with the public opinion that uses two hierarchical measurements in judging something. Indonesia has agreed with the idea of having the Middle East free of nuclear weapons, including Israel. Washington is aware of the potential danger and even the UN has taken some measurements in dealing with Israel’s nuclear plants. However, the implementation to further the diplomatic issue of Israel’s nuclear policy has yet to take place. Many have criticized Washington’s policy on Israel’s nuclear stance, but we need to bear in mind that doubt is the beginning, not the end, of wisdom.

Born on Nov. 4, 1932, Ali Alatas obtained his law degree from the University of Indonesia in 1956. He was the representative for Indonesia at the United Nations from 1983 to 1987 before serving as foreign minister under former dictator Soeharto from 1987 to 1999. He has recently been appointed as a senior presidential advisor to President Susilo Bambang Yudhoyono.