By Aulia R. Sungkar. Originally published in The Jakarta Post on October 24, 2015

Dubbed the world’s most modern and efficient aircraft family, the A350 XWB is Airbus’ all-new mid-size range aircraft equipped with new technology and improved facilities to compete with the 787 and the 777.

The A350 XWB features a 561-centimeter wide cabin, 15 cm wider than the 787, thus providing increased versatility. In a typical three-class configuration, the A350 XWB cabin features an 45-cm-wide seat at nine abreast in economy class, eight abreast in premium economy class and four abreast in business class.

The cabin is designed with panoramic windows to help create a nice atmosphere for the length of the journey.

From an entertainment aspect, the new aircraft is equipped with fourth-generation systems that take in-flight entertainment to a whole new level. The use of high-bandwidth fiber optics allows for better performance of high-definition video on a 30 cm screen in economy class.

The A350 XWB is also powered by the new Rolls-Royce Trent XWB engines, generating 25 percent C02 emission, arguably said to be the lowest carbon emission of any wide body power plant.

Dozens of journalists from various publications worldwide were recently given a tour of the Airbus manufacturing facility in Toulouse, France.

During the media trip, which thanks to an invitation from Singapore Airlines was joined by The Jakarta Post, we were given the opportunity to take a closer look at the making of the A350 XWB. 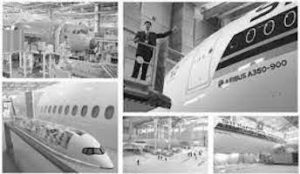 The first part of the assembly line was built between 2009 and 2011 and an additional building was built between 2012 and 2014. We are currently finishing an extension to the original building, which is scheduled to be completed by the end of this year. There are additional stations that will be used for all models of the A350 XWB,’ an Airbus official explained while handing out an information sheet to journalists.

According to the information sheet, the total construction cost and the required surrounding infrastructure represent an overall investment of Â¤240 million.

The A350 XWB final assembly line and its annexes cover a total area of 11 hectares.

As Airbus has committed to manufacturing its products in an eco-efficient way, the final assembly line meets the 2005 Thermal Regulation insulation standards, which is not compulsory for that type of industrial building.

Many of the materials used on the site are recycled during the construction works. The taxiway and aircraft parking zone where the buildings are constructed were planed off, crushed and re-used in the new building. This was done to reduce the volume of materials taken from quarries. More than 40,000 cubic meters of materials from the original site were recycled, thus reducing lorry traffic by almost 4,000 truckloads.

As for the lighting, Airbus uses a lot of natural lighting in the aircraft halls and keeps artificial lighting to a minimum, therefore reducing electricity consumption.

The media familiarization trip also included a 350 mock-up visit, as we were taken to explore variants of the new A350 at Airbus Mock-up Center. It’s a great place to learn more about the Airbus and its technology.

While accompanying the group of journalists, Tan Pee Teck, Singapore Airlines Product & Services senior vice president said that Singapore Airlines had selected the newly launched Ultra-Long Range version of the A350-900 for direct flights from Singapore to the US in the near future.

‘There will be seven aircraft to be delivered with an Ultra-Long Range, capable of flying up to 19 hours. We’ll also order four A350-900s, that will be delivered at the beginning of the year and scheduled for a maiden flight to Amsterdam in April next year,’ he said.

Tan added that one of the reasons for selecting the A350 XWB was the plane’s modified fuel system that increases fuel carrying capacity and its aerodynamic improvements that enable services to places as far as the West Coast of the US directly from Singapore.

Singapore Airlines also took the materials of the A350 and its variants into account as 70 percent of the airframe is made of advanced materials that combine composites, titanium and modern aluminum alloys.

According to a source from Airbus, the use of composite materials results in a body that is corrosion and fatigue free, thus making maintenance easier. This is due to the fact that titanium is a lightweight and corrosion-resistant substitute for steel.

As of the end of August this year, the A350 XWB had received 782 firm orders from 40 customers. And as of October this year, Singapore Airlines has 63 units on a firm order and 20 units on option for purchase rights.

During the media trip, journalists were given the opportunity to see Singapore Airlines’ first A350 XWB, which had just completed its painting process at the Airbus paint shop, also in Toulouse.

This means that the aircraft is now set to move to the next stages of production, including the installation of engines and cabin furnishing. These are the necessary stages prior to starting ground and flight tests.

According to a release made available to every journalist on the scene, the aircraft is scheduled for delivery in the first quarter of next year. Singapore Airlines said that it would operate the aircraft on long-haul routes to Europe as well as on ultra-long-range, non-stop services to North America.