Aulia R. Sungkar discovers that Koi Restaurant and Gallery at Kemang is more than just a fine-dining eatery for children. 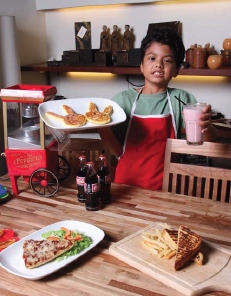 “Let’s try my scrambled eggs and bacon along with this vanilla milkshake and you will feel like a million dollars,” the ten-year-old Xavier Cornil says proudly. “In addition, the restaurant offers other selections of Western and Eastern brunch menu such as lox bagel, cucumber salad with yoghurt and nasi lemak, just to name a few.”

The elder child of Amalia Wirjono is proud of the weekend brunch kids menu at the restaurant his mother owns. Being in the hub of expatriate community, Koi brunch can be an exciting escape on a relaxing Sunday late morning. “Particularly for children, having blueberry rabbit-shaped pancakes in a flower-shaped plate and roti sobek French toast is an unforgettable buzz,” Xavier says with his boyish smile.

Eggs Florentine (poached eggs and sautéed spinach on multi-grain toast with hollandaise sauce) is among the popular brunch dishes at Koi. “Being aware of what my own children’s culinary taste is like and the restaurant’s experiencing with parents’ requests for the kids menu have turned Koi become a weekend destination for kids,” Amalia remarks. 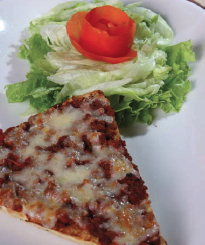 In addition to serving entrées such as the 200-gram tenderloin Steak and Eggs with vigneron butter sauce, savouring good healthy food is what most parents concern, Amalia adds that side dishes like steamed vegetables of carrot and broccoli is recommended as the menu can create a balanced diet for kids. “And you should try our grilled tomato. It’s yummy,” Xavier asserts with his mother nodding, gesturing an agreement with his statement.

Opened in 2003, Koi at Kemang is the second restaurant following the success of the first Koi on Jalan Mahakam that was established in 1991. Both restaurants are widely known among expatriates and high-end communities for its distinctive style by Belgian and Indonesian chefs Benoit Claeys and Karto, respectively.

The Koi’s setting for tables, sofas and bar stools, for some, look more like a café lounge. But most will agree that Koi has long been maintaining its uniqueness with the restaurant’s modern and traditional blending wood-based furniture and artifacts, in line with the adjacent gallery and shops. The Koi’s unique character stays but the restaurant has made changes to its menu and space designed for children. 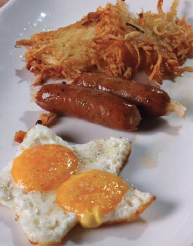 The new brunch kids menu at Koi has made it the home of children craving different dining out ambience. Using ingredients from both East and West, kids can experience international culinary tastes at the Koi’s cozy laidback dining atmosphere. “And look! There’s a kids play area with an array of colourful toys,” Xavier gestures.

The student at French International school is a true gourmet. Xavier appreciates many kinds of cuisines. European, Korean and Japanese are among his favourites. “But I like to cook myself when I’m hungry at home. As a boy, I’m proud of being keen on cooking because all the great chefs in the world are men!”