One of China’s leading car manufacturers, Geely, entered the Indonesian market two years ago to take advantage of the significant growth of the automotive industry here. 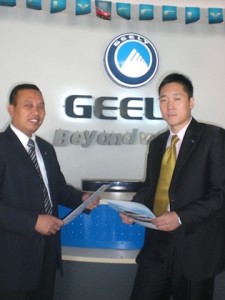 Geely Panda has been the primadona with the highest sales volume among the three models.  “This budget car is the cheapest for a 1,300-cc class with the on-the-road prices of Rp 107 million (around US$ 12,500) for GS type and Rp 117 million (around US$ 13,700) for GL type,” Budi Pramono, president director of Geely Mobil Indonesia, said.

He added that due to the rapid improvement in the middle class income, having a car has become necessary in major cities in Indonesia. “And a budget car, like Panda, fits the market.”

Budi asserted that Panda was the first mini car to achieve a five-star performance in a collision test in China. “Panda is now regarded as the safest mini car in China. In Indonesia, the product was recently tested and achieved a satisfactory result.”

With such affordable prices, the presence of Geely Indonesia has undoubtedly won the hearts of those from various walks of life in different segments, particularly in the burgeoning middle class.

“We are targeting the sales volume to reach 2,500 units in 2011. And we are optimistic that Geely Indonesia is able to sell more than 800 units during the peak season of July and August, especially during the holiday season of Idul Fitri and Indonesia International Motor Show that is scheduled to commence on Friday the 22nd (today),” Nathan said.

Geely Indonesia markets the three models through the company’s 16 showrooms that spread across the country in cities of Jakarta, Bandung, Semarang, Surabaya, Malang, Denpasar, Medan, Pekanbaru and Samarinda.

“We are going to open a new showroom in Fatmawati area, South Jakarta this Saturday the 23rd, and another one in Kediri, East Java on July 30th. So, by the end of this month, the total number of showrooms in the country will be 18,” Budi said, adding that Geely Indonesia is slated to open more showrooms in Makassar and Banjarmasin, targeting to have at least 20 in the country by the end of this year.

Such rapid growth is part of Geely’s commitment to maintaining and increasing the company’s product quality. “All the Geely’s products on the market are sophisticatedly designed with aesthetic look and reliable engine performance without overlooking the safety as the most important elements,” Nathan Sun, director of Geely Mobil Indonesia, assured.

He said that the car comes with standard-equipped features such as power windows and airbags. Aside from bringing a big name from China into Indonesia, Nathan is aware that selling automotive products will not give a quality assurance without the delivery of after sales service.

“Most carmakers provide after sales service during the first three years after the purchase or until the car reaches 100 thousand kilometers, with 5,000 km periodic service. With Geely, you can have the periodic service for every 7,500 km for five years or until your car reaches 130 thousand kilometers. During this period, you don’t have to spend any expenses for certain damages as long as the damages are not caused by reckless use. This can be translated as an assurance of Geely’s quality performance as a reliable car,” Nathan explained.

Besides Indonesia, Geely has exported its cars to countries such as Srilanka, Iran, Egypt, Australia, New Zealand and Chile. Some of these countries apply strict rule of quality control, allowing only high standard cars to enter the country. “This is an obvious fact that Geely has built the trust among car buyers worldwide,” Nathan added.

Both Nathan and Budi are optimistic that there is much space in the Indonesian automotive market for Geely to grow.

“With affordable prices, longer after sales service and comparable quality to Japanese and Korean carmakers, we are convinced that Geely will position itself as one of the major players in the Indonesian automotive industry in the near future,” Nathan said.