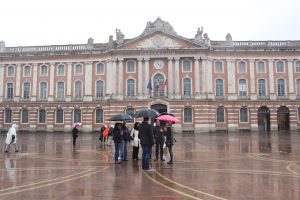 Toulouse gets a fraction of the visitors received by other cities in France such as Bordeaux, Nice or Lyon. However, the metropolis of about a half million souls has many charms, a crackling cultural scene and beautifully ancient buildings that will reward any traveler. The capital of the Midi-Pyrénées region is also known locally as La Ville Rose (The Pink City)–a nickname it earned thanks to a host of buildings made from colored terracotta bricks.

You might also call Toulouse a river city, as it sits at the confluence of the Garonne River and the Canal du Midi, a navigable waterway, built in the 16th century and
linking the Mediterranean and the Atlantic. It was named a UNESCO World Heritage site in 1996. If you’re not into walking, rent a bike from VélôToulouse, the pick-up/drop-off bicycle rental system and explore the lush greenery that surrounds the canal. While dusky pink bricks have reigned supreme in Toulouse for more than 1,500
years, when it was the capital of the Visigoths; the city is thoroughly modern.

Toulouse is also the center of European aerospace industry and home to the Airbus factory. No visit to Toulouse is complete without visiting La Cité de l’Espace, Europe’s
best space museum. From afar, a life-size (400-meters-plus!) version of the Ariane 5 rocket can be seen. You can experience a simulated satellite launch and explore a mock-up of the Mir space station. However, during a recent visit, I only had one day to explore the city, which is about seven hours’ drive from Paris. Fortunately, I was in Toulouse in the autumn, when the temperature was around 10 degrees, making it an ideal day to explore the city by walking. I spoke with an old friend, Adriana
Ariasti Martin, a long-time resident of Toulouse, and here’s some of what she told me to do. 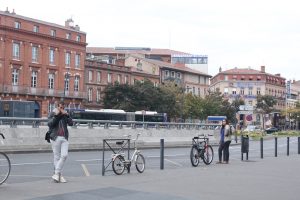 The Game’s Afoot
My first destination was Gare de Toulouse-Matabiau, the city’s main railway hub, which dates to 1905. The station is connected to the Toulouse Metro and is only steps away from downtown, where my eyes caught an older, yet still function building, which, remarkably, was actually a McDonald’s fast food chain restaurant.
A little further down the road was a multi-story building: Galeries Lafayette, France’s most famous department store, displaying the latest fashions in a building
with a neo-classical architecture style.

A few more blocks took me to the Place du Capitole, the city’s magnificent main square and the heart of Toulouse. The building’s neo-classical façade and pink marble columns were completed in 1760, ten years after construction started. Toulouse was also home to Antoine de Saint-Exupery, the author of Le Petit Prince (The
Little Prince). He lived in Toulouse when working for Aéropostale as a commercial pilot.

Visit Hôtel du Grand Balcon, a block away from Place du Capitole, for interesting information about his life and works. If you’d like to take a break, find a table
at one of the many cafes and order a drink or the famous Philippe Faur ice cream and people watch. Or you can walk south and you’ll come across the Vieux Quartier, or
Old Quarter-a tangle of lanes and leafy squares brimming with cafes, shops and restaurants. 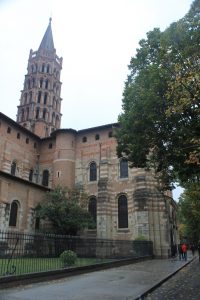 There were quite a few pavement cafes where local residents could be spotted sipping coffee or quaffing an early aperitif. Take the opportunity to try Toulouse’s
signature dish: Confit de canard. It’s duck leg that has been cooked slowly in its rendered fat over a long period of time at low temperature. The Basilica of St. Sernin was my next destination. In halting French, I spoke with man who told me that the redbrick edifice was another UNESCO World Heritage site–as well as one of best-preserved Romanesque structures in the country.

Another church, albeit somewhat further afield, is Saint Aubin Basilica, which hosts a Sunday market with a great and convivial atmosphere. You can find everything here: vegetables from local farmers, organic products, fish, South American empanadas, clothing and hat stands, shoes, fresh eggs, and even live chickens!
Back on the road, I stopped at Pont Neuf, or the New Bridge–no relation to the one in Paris. Despite its name, the bridge, which dates to the 16th century, is one of the oldest in France and boasts panoramic views.

On the grounds surrounding the bridge are several private homes built several hundred years ago and still in operation. Nearby are a wealth of impressive hôtels particuliers, or private mansions, and another old quarter. How time flies! I had already spent over three hours of walking–something that I’m reluctant to do in Jakarta. Yet even more was just steps away–something that I will have to save for a second trip.