Diageo Indonesia has moved its office to South Quarter, Jakarta. The office reflects the diversity of Indonesia that Diageo celebrates every day.

While looking at it, I hear a voice coming from behind my back, “the batik is beautiful, isn’t it?” 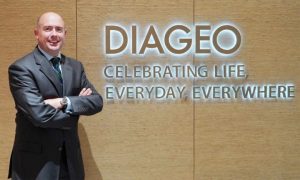 I turn my head around and immediately see Christophe Beau welcoming us with a broad smile. He is the Managing Director of Diageo Indonesia, whom we agreed to meet for an interview in his new office in South Quarter, Jakarta.

Diageo is a British multinational alcoholic beverages company. It has 180 offices across the world, including Indonesia.

Hospitable, energetic and high-spirited Beau allows us to sit down on a sofa, not far from the batik paintings hanging on the cream-painted wall next to a bar with a wall lined with wooden cupboards holding neatly arranged bottles of liquor. The name Guinness with a harp as its logo on the top part of the bar stands out. The interior represents diversity in Indonesia that Diageo celebrates everyday.

Diageo Indonesia’s new home, which the employees started to occupy in April 2019, showcases the spirit of a “new way of working”. It reflects its mind as the creative and innovative thinking hub. “It is a place where all employees have the same opportunities to express themselves to be the best,” Beau says.

“We have a ‘Happy Hour’ here every Friday. It is the way we relax, interact while sharing ideas in an informal manner,” says the Frenchman.

Batik painting is part of how Beau respects Indonesian culture. Placed on the left and the right side of the bar, the batik is an open gateway for Indonesians eager to learn more about Diageo’s business operation in Indonesia. Whether it is related to its vision, commitments, performance, market share, brands and products.

Respecting local culture is in line with Diageo’s global strategy to be the best performing and most trusted and respected Consumer Packaged Goods (CPG) company by adjusting itself to the local environment in many ways.

When it comes to business operation in Indonesia, Diageo tries its utmost to comply with the existing regulations on alcohol. “In this way, Diageo gains trust and respect from the local government,” says the 45-year-old, who started to lead Diageo Indonesia in 2017.

Operating a business overseas is not new for Beau. Prior to assuming his role as Managing Director in Indonesia, Beau had been working with Diageo for 16 years in different countries, including Ethiopia, Kenya, Chile and Puerto Rico. His previous managerial experience means that he is very familiar with how to set the right strategy to face any challenges related to sales growth and market expansion overseas.

According to Beau, trust, which at the end of the day, is closely related to sales growth and market expansion, should not only come from the government bodies, but also from other stakeholders, including shareholders, employer, employees or talents, partners and consumers.

Earning trust from the community is even more relevant in Indonesia because “we are working in a category that is sensitive. We have to make sure that people see Diageo as a corporate citizen that is doing right in Indonesia,” he assures.

However, lack of access to authentic alcohol beverages in the market has also had an adverse impact. As widely reported, a number of people died after drinking oplosan (bootleg alcohol). Irresponsible individuals have taken advantage of the scarcely found authentic alcoholic beverages in the market by producing unlicensed liquor, which poses a health hazard to the consumers.

Because Diageo cares for people, the company collaborates with the government to tackle the issue to prevent people from drinking excessively or becoming victims of oplosan. “We really want to pass on the message that people drink better instead of drinking more,” he says.

Diageo promotes responsible drinking and works with industry and other partners to tackle alcohol abuse and share information and best practice with policymakers to ensure that appropriate policies are in place to tackle excessive or harmful drinking.

“Diageo continues to promote “positive drinking” through a responsible drinking campaign, champion drinking enjoyment, encourage collaborations and partnerships, and optimize the frontline (the bartenders) to be more responsible in selling the brands.

“We are committed to rolling out the effort to change the behavior regarding the misuse of alcohol and underage drinking,” he says.

Apart from actively demonstrating its role in educating consumers about alcohol beverages, Diageo also participates in community empowerment through Sustainable Development Programs, such as ecotourism and disaster relief programs.

“We continually apply initiatives to reduce plastic waste, starting from reducing plastic straw use,” he says.

All of the above initiatives are in line with the company’s practice of good corporate governance (GCG) and its commitment to working together with the government to shape transparent, accountable, responsible, independent and fair alcohol drink business in Indonesia.

Diageo is currently a leading beverage company in the spirits category, with its top spirits brands including Johnnie Walker, Singleton, Smirnoff, Captain Morgan and Gilbeys.

Indonesia, with a population of more than 260 million comprising different ethnic groups, cultures and religions, plus the increased middle class, represents one of the most exciting opportunities for Diageo over the next decade and Diageo wants to be part of this vibrant nation and market.

Beau is highly appreciative of the diversity that Indonesia offers. This is in parallel with Diageo’s business operation vision in which the company celebrates diversity everywhere it operates, in the office, at the market with its consumers, distributors and partners.

Another encouraging trend is that the spirits market continues to grow. Indonesia will follow a trend in which legal drinking age (LDA) consumers who choose to drink alcohol beverages, look for new spirits drinking experiences by, for example, trying cocktails, which contain an element of spirits.

Diageo Indonesia introduced its “a global company with a very local taste” idea through its Guinness and Smirnoff activities. Guinness, for example, celebrated batik as the symbol that binds Indonesian people. “In a society with increasing polarities in opinion, Guinness celebrates the collective Indonesian spirit, Together We are More,” Beau points out.

Another brand, Smirnoff established Smirnoff Mix It Up as a gateway for Indonesians to experience and enjoy the unique taste of good times through creative mixed music and mixed drinks.

The implementation of the newly introduced “a global company with a very local taste” idea is expected to boost Diageo Indonesia’s performance.

“We contribute to the government’s revenue through taxes or providing employment.”

In line with the government’s program to boost tourism, Diageo also takes an active part in promoting Indonesia’s tourist destinations so that Indonesia will not only see an increased number of tourists, but also repeat visits.

Beau expresses his delight at learning that Diageo Indonesia’s factory in Bali had recorded the largest increase of excise contribution in the province last year. Diageo Indonesia also received the BPJS Award and status as one of the most compliant taxpayers in Bali Province. “For us it is really a reward of pride because the office received the award in less than five years after it was established,” he says.

When it comes to employees, Diageo refers to UN Development Goal No. 5 on gender equality to ensure its employees’ prosperity.

On top of that, Diageo has also applied a progressive parental leave policy to support quality parenting. Under the policy, new mothers have 26 weeks’ paid leave and fathers have 4 weeks’ paid leave. “By giving both mother and father leave, we see that they are able to enjoy the birth of their kids,” Beau points out.

People or talents, another one of Diageo’s crucial pillars, are encouraged to continually develop their capacity to respond to the technology-driven changing business environment. “For example, we have to make sure that e-commerce becomes relevant for us. Digitalization is very important for us. This is a new skill that we have to acquire so that we can always follow the trend,” he says.

Based on a recent employee survey, 84 percent of the company’s employees are fully engaged. “This is something that we are very proud of,” he remarks in a happy tone.

Although Beau is in close contact with alcohol beverages almost every day, he acknowledges that he does not drink a lot. “I want to be an ambassador of this industry. I try to drink moderately. I would say I drink a lot better, not drink more,” says Beau, who takes regular exercise to keep his body fit and healthy.

Touching upon his type of leadership, Beau says, “I show how much I care to people. I have spent time on understanding Indonesian culture, how people think and feel at work.

“When you have the ability to emotionally connect (with the employees), then you can challenge them for the better. That’s what I am trying to do.”

“Even if we aim to create a better environment, we do it in a fun and enjoyable way as our purpose is ‘celebrating life every day everywhere’,” he remarks enthusiastically.

Diageo Indonesia’s new office with a comfortable, fun and pleasing ambiance will, no doubt, stimulate the staff and employees’ creative and innovative thoughts, one of the crucial elements needed to achieve the company’s shared ambition: becoming the best performing, most trusted and respected CPG company in Indonesia by coming together as one Diageo while celebrating its diversity, every day, everywhere.