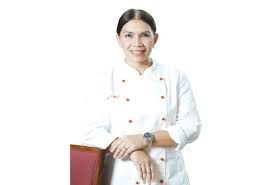 Indonesian chef and food writer Petty Elliott is no stranger to Indonesia’s culinary world. With more than 16 years of gastronomic prowess under her belt, she has achieved remarkable milestones in her career, including her participation in the BBC’s MasterChef competition, her venture in a boutique private dining service and her role as a guest chef at various culinary events and with many famous F&B establishments in Jakarta and Bali.

Born in Manado, North Sulawesi, and raised in Jakarta, Petty has written culinary columns for various Jakarta-based publications since the early 2000s, as well as publishing her own cookbooks. Her first book, Papaya Flower: Manadonese Cuisine, Provincial Indonesian Food, was featured at the Frankfurt Book Fair in October 2015. Petty’s strong bond with traditional Betawi (native Jakartan) street food led her to publish her latest book, Jakarta Bites, in mid-2016.

The following are excerpts from an interview with the chef and author, as she talks about her 200 pages of recipes and tips for those seeking to embark on a culinary journey to the Indonesian capital.

Question: What inspired you to write the book?

Answer: The history of Jakarta and the culture of the Betawi people as the city’s indigenous population inspired me to write the book. Aside from providing insights into Makanan Betawi (indigenous Jakartan food), the book also aims to give readers an idea of the various cuisines from all over Indonesia that are available in Jakarta. So, they don’t have to travel to regions outside the capital to sample the food. I also included simple and easy-to-follow recipes, including tips and tricks for modern cooking as well as options for substituting those hard-to-find ingredients. In short, I wanted to present the flavors of Jakarta through my recipes. And the book is about the sights and sounds of Jakarta’s street food.

It all started with my passion for Betawi cuisine, then the history. Betawi, known as Batavia by the Dutch, was famed for its fare that combines local flavors with outside influences, such as Chinese, Arab, Indian and European. It’s a pity, though, that many of the dishes are not as popular as in the past. Many of the dishes are now hidden gems in Jakarta’s culinary scene. For international foodies, Jakarta’s street food is not really that popular, especially when compared to the street food found in Bangkok, Penang and Singapore. Through my book, I have the vision to promote Betawi traditional street food, not only to Indonesians but also to an international audience. It is also worth sharing that the book highlights dishes from other regions of the archipelago that have become favorites at Jakarta’s traditional street markets.

What are your favorite dishes featured in the book? How about the beverages?

I’m Manadonese, so I like everything about Manado food: pasta woku blanga, corn cake with dabu-dabu, pork satay, gohu ikan (raw tuna with chilies and basil). From other regions, I like soto ayam (chicken soup) and beef rendang. As for the beverages, I like any fresh juice.

What would be your advice to find the best street food in Jakarta?

The city’s culinary scene is now way more vibrant than in the past. You can pretty much get traditional dishes at almost any type of eatery, ranging from kaki lima (food stalls) to fine dining establishments. Pagi Sore (for West Sumatran fare), Beautika (for Manadonese cuisine) and Café Betawi (for Betawi food) are among the places serving authentic Indonesian dishes in comfortable seating.

What are your recommended foods to sample for tourists visiting Jakarta?

Nasi Padang, which is a dish of rice that includes beef rendang and choices of vegetables and other protein). Others are gado-gado (traditional salad with peanut sauce) and the varieties of satay. You should also sample Indonesian soto (soups), like chicken soup, as well as the different styles of Indonesian noodles.