This English version is translated from the original article published in Indonesian on SWA.co.id

NOTE: The featured image is different from the one published on SWA.co.id

The writing industry in Indonesia has long enjoyed rapid growth. As of late, this industry has experienced even further progress. These days, the writing industry no longer just revolves around services involving novels, nonfiction books, literature or journalistic news.

It has also come to follow new sources of demand thanks to developments in business and government and social institutions that have come to need various writing services that include writing for advertisement scripts, film and soap opera scripts, blog scripts, articles for internal publications, newsletters and internal magazines (in-house magazines), advertorials, as well as editing and translation services (from English to Indonesian or to other foreign languages). 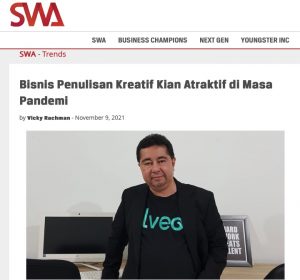 Alveo.co.id, a company that focuses on providing various writing, translating and editing services, has seen a massive explosion in demand for writing, translation, editing, and social media services, especially for corporate clients. “The existing market may still be wide, but selling written products is also not an easy thing. It takes persistence and perseverance,” said Aulia R. Sungkar, founder and director of Alveo in a statement, as reported by SWA Online in Jakarta on Tuesday (9/11/2021).

Aulia (nicknamed “Ollie” in his day-to-day life) refers to his profession as that of a “writerpreneur”. A “writerpreneur” is a portmanteau that combines “writer” and “entrepreneur”. It’s an appropriate name for a profession for someone like Ollie who for over two decades has worked as a writer and journalist at an English language media company headquartered in Jakarta, before starting a new business in the form of a Limited Liability Company (PT) with his partners some five years ago.

In the five years since Alveo.co.id was founded in November 2016, it has had numerous clients both domestic and foreign, hailing from places like Australia, Singapore, Canada and the United States. Ollie, who graduated from the University of Arizona in 1997, said that he began his writing career when he was in college, during which he worked as a part-time writer.

Ollie says that teamwork is key to the success of running his business. “I was previously only able to provide English writing services for my clients. But now, having established my company, I have seen how valuable teamwork can be. Now we can provide English, Indonesian, Mandarin and Japanese translation services,” said Ollie, who initially only had two employees when he established Alveo but now has eight full-timers and several other contracted employees for a number of specific projects.

Projections for Writing as a Business

Data from the Dentsu Aegis Network indicates that the writing industry in 2020 experienced growth as a whole and that it will continue to grow on both a domestic and a global scale in 2021. This projection is further underlined by the Dentsu Insights Consumer Report, which states that the nation’s online consumption increased by 70 percent in the 60 days since the start of the pandemic in Indonesia. And as internet usage increases, so too has the writing industry also enjoyed the growth that comes as part of this recent trend.

According to Dentsu, the written content is extremely important for business. It also noted that digital marketing is important for improving a brand’s reputation. “It is for these reasons that companies, organizations and institutions will always have a demand for writing services, regardless of whether they’re small, medium or large in scale,” Ollie said.

In line with this Dentsu report, Ollie sees promising potential on the horizon for the writing industry. “There is still plenty of continuing demand for writing services despite the pandemic. Throughout this pandemic, my team has been working from home. Yet we still have been able to coordinate with each other and, as a result, we have been able to carry out our work smoothly thanks to the help of technology and the internet making it possible to work from home. This work also includes building relationships with clients and looking for new business opportunities. All of it can be done online. I thank God that, despite the pandemic, Alveo.co.id is still able to survive and even grow,” Ollie said.